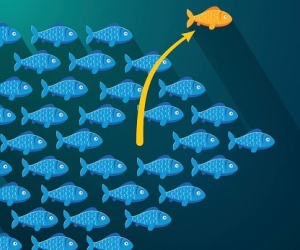 Sometimes, we stumble across an answer to a problem that we did not know existed. Alec and Aric Avedissian are solving two problems at once with their business Rareform. Rareform’s customers get durable, one-of-a-kind surfbags while the company helps reroute some of the thousands of pounds of billboard material that is discarded in the U.S. every day.

The average billboard goes up for four to eight weeks, then is discarded. While there are no firm figures on how many billboards exist in the United States, the number is high. The Los Angeles area alone is host to over 6,000 boards. Since billboard material does not decompose, that is a lot of waste.

Inspiration in the Strangest Place

Avedissian stumbled on the idea of surfbags from billboard vinyl after spending time volunteering with a fishing cooperative in El Salvador. While there, he saw people using discarded billboards to make roofing. The sight was a revelation. He’d previously never considered the material and had thought that billboards were made from paper. The discovery that this durable material was being discarded every week spurred his innovative idea.

While the bags offered a durable product at a reasonable price, the company was having a hard time finding their footing. They’d had $1.1 million in sales over three years, but saw that sales were slipping. Had they reached saturation? They decided to go on Shark Tank to see if they could find the funds that would bring them growth. Two out of the three judges did not bite; they were concerned not just with the falling sales, but with the complexity of the concept of Rareform’s product. However, Kevin O’Leary was not dissuaded and made an offer. And, it turned out that the best benefit for the product was appearing on the show.

Before their Shark Tank appearance, Rareform would recycle anywhere from 10,000 to 20,000 pounds of vinyl each month. With the added visibility provided by the show, they’ve increased their monthly recycling to 50,000 pounds.

When It’s Okay to Go Niche

Surfbags are already a niche item, appealing only to the approximately 23 million surfers worldwide. By adding the factor of the recycled bags and their one-of-a-kind nature, they become even more niche. However, faith in their product and a willingness to seek out new opportunities to get their wares in front of the audience worked out.

Small businesses should never shy away from a niche product as long as it has a few things going for it. The questions you should ask:

In today’s highly connected world, there is room for every well-made product, even if your audience is small. By focusing on what you bring to the table, you can find your audience and build success for your brand.