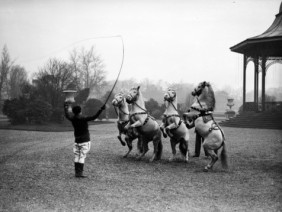 Have you ever heard the phrase, “a one-trick pony?”

Researchers believe the “one-trick pony” phrase comes from an entertainment background. According to research, the earliest reference was associated with circus ponies used to perform a trick or feat that impressed audiences. The ponies involved could do an amazing act, such as walking on their hind feet, but that was all they could do. Eventually, the audiences got bored with the show. In one version of the story, a pony had a dog partner that would ride on it. While the audience got sick of seeing the pony do the same thing every time the circus was in town, the dog gained fame because it learned and began to perform new tricks. In time, the dog became the star, and the pony was relegated to hauling circus carts.

Is Your Business A One-Trick Pony?

The moral of the story here is not to allow your business to get stuck on only one good thing. It’s tempting to think that if you have something good going, why ruin it? Well, over time that good thing will become less and less popular. The number of customers who want it will diminish and the business will have to start cutting prices to keep it attractive. Eventually, the product or service won’t sell at all.

Palm PDAs and Blackberry were both perfect examples of the one-trick pony mistake. They both had a really good product for a while, but both companies failed to upgrade and develop new products. Eventually, someone else did, and their customer base walked away. Those text screens on a Blackberry and similarly on a Palm PDA simply looked old and obsolete versus smartphones like the original Apple iPhone. The world had changed.

Is your business riding the wave right now of a star pony? If so, now is the time to be looking for and generating a new path. Diversify into a new product or new service. Not only does it protect your business’ longevity, but multiple revenue streams from different customers will eventually offset each other when one of them starts to weaken.

Companies that map out their product/service life cycle and plan for eventual loss with replacement “ponies” are the firms that survive and grow. Don’t let all your energy, money, time, and effort go down the drain with a one-trick pony. Instead, use the initial success to be your springboard for the next one.

One thought on “The One-Trick Pony Syndrome”